A sustainable cattle ranching program in Colombia's Orinoquía region is supporting silvopastoral methods that bring together trees, forage plants and livestock to help farmers adapt to the challenges of a changing climate.

Get more stories on development with our newsletter. Choose from different categories and select your preferred language:

ABOUT THE WORLD BANK GROUP
The World Bank Group is one of the world’s largest sources of funding and knowledge for low-income countries. Its five institutions share a commitment to reducing poverty, increasing shared prosperity, and promoting sustainable development.

Edgar Winters is Director of the Oregon Agriculture Food and Rural Consortium (OAFRC). Mr. Winters discusses the importance of Oregon's need to grow hemp now before the Oregon Department of Agriculture in January 2015. Published on Feb 11, 2015

This is a spirited interview with the pioneers of the U.S. Hemp Industry at the Canadian Hemp Trade Alliance (CJTA/ACCC) National Hemp Convention, Hemp 2014: Paving the Way held November 16-19, 2014 in Delta Winnepeg.

It's a spirited conversation that should not be missed.

- Anndrea Hermann, President of the Hemp Industries Association and a professor at Oregon State University. She addresses the steps necessary to building "a really solid legitimate industry" through Agronomy, the science and technology of producing and using plants for food, fuel, fibre, and land reclamation and emphasized, " while working with our partners and our colleagues around the world

- Doug Fine, " Everything I do as a journalist has a "sustainability and optimistic angle." A hemp  advocate, he references a community-based tri-cropping blueprint found in his book, Hemp Bound: Dispatches from the Front Lines of the Next Agricultural Revolution.

Video of resentstion  6th January 2015 in Salem, Oregon, USA by author. journalist and hemp advocate appearing before the Oregon Department of Agriculture. Produced by Barry Heidt.

The Tennessee House of Representatives voted overwhelmingly on March 31 to approve a bill directing the state's Department of Agriculture to set up a licensing program for people to legally grow hemp. The bill's sponsor, Cosby Republican Jeremy Faison, said the cannabis plant has a long history in American of being used for productive, beneficial uses. Faison noted that in the recent U.S. Farm Bill, signed by President Obama back in February, permission is granted for states to regulate hemp production and allow universities to study it. After the bill passed on an 88-5 vote, Faison handed products made from hemp to the chamber's leaders of both parties. Among the items were breakfast cereal, soap, cooking oil and twine. Published on Mar 31, 2014

An Australian documentary from 1994 which brings to light the history, many uses of, conspiracy and smear campaign against, and the future of one of the planet's most versatile and potentially revolutionary plants: cannabis.
BILLION DOLLAR CROP shows how the recently developed, non-drug variety of hemp is being researched and cultivated internationally because of the plant's versatile qualities and environmental friendliness. This program takes the audience on a world tour from Australia to the United Kingdom, and from The Netherlands to France and the US. It illustrates how hemp is being cultivated as an industrial fiber for use as an alternative to wood for paper production, to cotton for clothes, and to plywood for construction. We all benefit, especially our forests and topsoil. Published on May 8, 2012

The Other Inconvenient Truth: How Agriculture is Changing the Face of Our Planet by Jonathan Foley, director of the Institute on the Environment (IonE) at the University of the Minnesota and leader of  the IonE’s Global Landscapes Initiative. Foley’s work focuses on complex global environmental systems and their interactions with human societies.

We typically think of climate change as the biggest environmental issue we face today. But maybe it's not? In this presentation, Jonathan Foley shows how agriculture and land use are maybe a bigger culprit in the global environment, and could grow even larger as we look to feed over 9 billion people in the future.

Over the last two years, Worldwatch's Nourishing the Planet (www.NourishingthePlanet.org) team has travelled to 25 sub-Saharan African nations - the places where hunger is greatest - and uncovered a

organizations, governments and universities. This is a trailer of the movie, click on image to buy book. 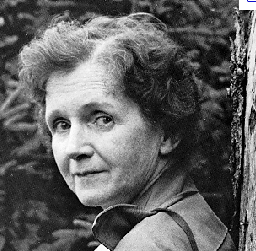 Rachel Carson was born in 1907 on a farm in Pennsylvania.  As a young child, Carson's consuming passions were the nature surrounding her hillside home and her writing. If you have never read her books, we recommend starting with the Silent Spring. She is our model for what it is to be a sustainability advocate and an earthsayer.
EarthSayer Rachel Carson
Date unknown Format Documentary
Length unknown Keywords SustainabilityMember of Special Collection Rachel Carson 1907-1964 More Details
Email a Friend